I have to be one of the world’s worst in this department of the writing process. People finding mistakes in my spelling or syntax or questioning punctuation is bad enough. When anyone suggests even in the most friendlies of tones that there could be improvements in a character or plot line then hopefully visible warning beacons start to flash and they will drop the subject. Should someone be unwise enough to try and be critical then if they are lucky they just get the cold treatment. As my wife says ‘You’ll not be told’. And I won’t.

Except in the case of one short-story (unfamiliar ground for me) where without the valuable help and patience of Rachael Ritchley the story would have never flown.

Visit Rachael’s site. It’s a treasure trove for writers of Fantasy and Rachael does not only write YA Fantasy she creates the most amazing covers

So back to me ‘n self-editing

My fault. My problem. But enough of these quirks,  introspections and possibly controversial comments. Let us away to the practical.

One of the issues with self-editing is that no matter how diligent you are, there will always be tendencies to:

(A) Overlook a mis-spelt word because Word recognises it as another word eg.  You have written a passage in which you character makes an entry in their Diary, only for you to find when the book is out in the public domain the character appears to have been writing on the walls of a place where milk products are made.

(B) Lose control of those indefinite or definite articles when you were sure you had them in the write place.

(C) Forget at night time when you final shut down your device to intone the mystical chant which will ward off the evil cyber-pixies from sneaking in and make typos in your precious work.

(D) Not notice that sentence is a tad too long and those commas or semi-colons don’t hack it for you.

(E) Somehow fail to notice that the piece of prose which in your mind is brilliant, is actually in the cold light of reading by someone else to be incomprehensible.

(F) Possibly be guilty in the eyes of one grammar sect or another of an act of punctuational heresy.

Now aside from (E) & (F) which are unavoidable even to the most astute and gifted writer, the others are the banes of writers who insist on ploughing their own self-publishing, self-editing  furrows (or according to some of a harsher outlook- digging their own graves)

So never mind about all the blah-blah about holes in plots, lack of character development, structure of narrative etc which truth be known are but mere opinions what about those aforementioned pesky practicals? Which despite what you might consider to be your most diligent efforts still sneak in?

Well, let us away to the Word Toolbar. Normally for a writer a nightmare jungle, that truth be known has been designed with a heavy weighed favour for business presentations and academia while having no notion of  how to assist in the artistic process.

I knew there was some function which read out written copy because while typing out at a goodly rate I used to accidentally hit a combination keys and someone would start speaking at me. (Apparently it’s Alt+Ctrl+Space…how the heck could I hit those accidentally????)  However by stubborn diligence this was tracked down to ‘Review‘ and thence ‘Read Aloud’ 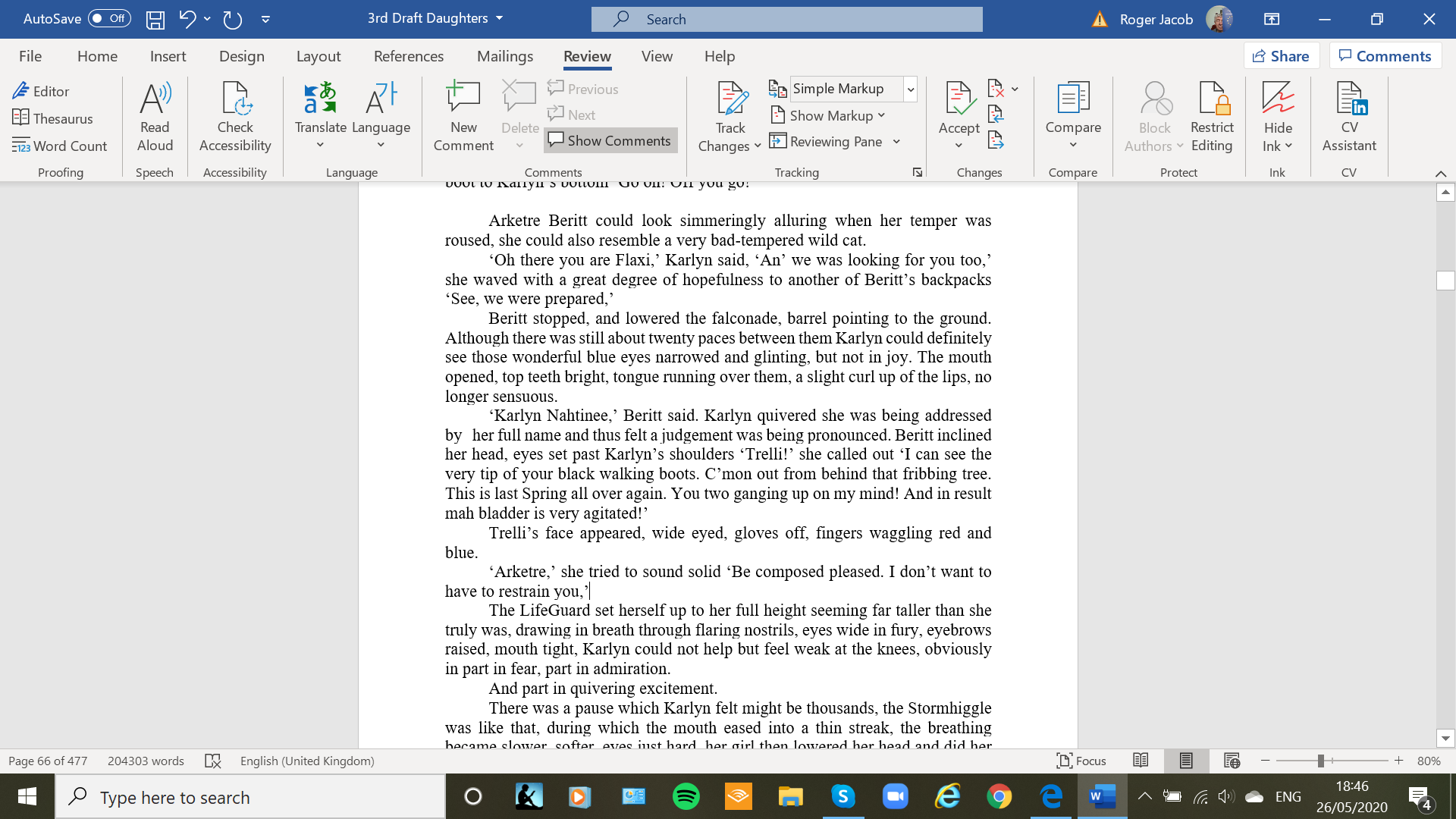 Once ‘Read Aloud’ is clicked on, at whatever word your cursor is on, away will go the narration.

The voice reproduction is not very robotic. If fact the voice word per word is very human. The narration would not pass muster on an audio book, but never mind that is not its purpose. So let’s look at a breakdown on the process:

The speed of the narration is designed for the listener to pick up on errors or questionable phrasing so you will notice ‘things’ . Each word is highlighted as it is spoken, thus you can pin-point the pesky problem. Though the narration does not stop so you have to be swift if you want to amended it there and then. Go the A and click to stop the narration or use the set of tools which will be visible on the right side of the screen; you can change the voice, and speed- the latter is not recommended, it is not subtle.  Do not try and amend without stopping as the amendment will be at where the narration is and not where you want it.

Pronunciation is nearly flat of accent, but is overall very good. Some words can sound quirky (Eg: ‘Squirrel comes out as ‘Sk-wi-rell’), contractions might result it the word being spelt out in single letters, along with any sounds you may write such as ‘Hmmm’ (‘H-m-m-m’), others however the programme has no problem with. If you are writing Fantasy or SF you might well find a whole new dimension to those place and character names.

It will read as it finds, thus is very good at alerting you to something your hearing picks up but your reading speed missed. Pesky typos are exposed in their oddities and those definite or indefinite articles are shown to be in the wrong place. The programme does not appears to have universal sensitivity to punctuation, but there is a definite pause when coming to a ‘full stop’ , this is very useful when it dawns on you that particular piece of prose is far too long as one sentence.

As it is a programme you will have to accept your characters are going to sound somewhat soulless; although there is one slight benefit to this. If their intent, emotions and individuality still come through then you know you are on the right track!

A flat and soulless read can be very useful in picking up on one of those oversights as highlighted in (E). The writer on hearing something narrated back to them in this fashion will have ‘Uh?’ moments and revisions will start to form in their mind. Thus prepare yourself for a 1,000 word extract collapsing while crying out ‘re-write’ ‘re-write’ . As you know these re-writes might be conducted at haste and contain their own ‘issues’, ‘Read Aloud’ will point those out to you too.

One final thought, aside from self-editing books this system would be very useful for those very long blog posts, the pitching letters, book summaries and blurbs, for all of the above reasons.

Having become familiar with the basics, my own method is as follows.

I work one chapter (on average 2000 – 3000 words) at a time. It is advisable to conduct a review in smaller ‘chunks’ so you can keep track on the errors/problems and revisions arising.

To repeat. When the narration highlights an issue I click on ‘A’ to stop the process and conduct the revision there and then, before clicking back on to continue. Some writers might find this disruptive and prefer to have a notebook and pen at their side to record the error then tackle a group of problems in one go.

I also use this system on reaching a part of the narrative which (1) I know was rushed because it was only a link between two important parts, or (2) there is a complex interaction. These might have already been cleansened of any errors in typos, syntax, wrong word, punctuation etc however listening to a flat narration has often given me a broad picture insight into whether the intended basics of the extract have worked.

Currently I have found the average number of words reviewed each day is approaching a minimum of 5,000 which take me about 1 hour per 5,000. These figures of course are very individualistic and should not be taken as any you should aim for. They are simply an observation, each person will have separate targets and outputs.

I have to say, for once Word produced a most useful aid to the overall writing process. This is recommend to anyone embarking on self-editing in its entirety. It would also be useful for anyone looking to send their work to a professional editor or beta-reader, after all their job is challenging enough without having to confront those items highlighted in (A) to (D)….items in (E) & (F) are between you guys.

Try it with a small portion of writing first and see if it works for you.

Have a good re-write

20 thoughts on “Microsoft Word Actually Being Useful in Self-Editing”