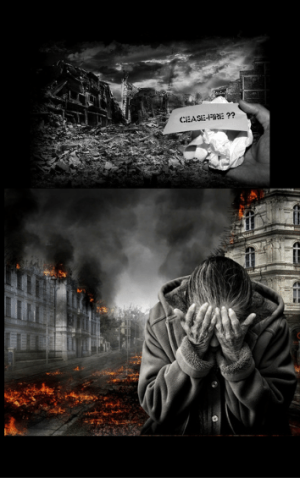 As Legions Before Us. We Will Be Tested

This not grandstanding; nor doomsaying; nor least of all a rallying call. We are moving past all of that. We are in the place where Reality is demanding our choices. This is how it is. You are being drawn to those choices, you will be asked to judge which paths.  For there are two human emotive tectonic plates grinding together and at some stage one will flip over the other, and there will be the quake. Those are National Domestic Pressures and The War  In Ukraine. Both remorseless, unavoidable, most of the elemental forces out of your control. Your reaction though will still be yours, along with tens of millions of others, each drop, each flake with its own weight and influence. Prepare yourself. And do not look for advice or guidance here I would not presume such arrogance.

The world is still dealing with a pandemic, the, medical, social and financial costs. Nations are facing domestic political upheavals in one form or another. The two closest to my heart being The Fracturing of Consensus in the USA and Brexit in my own UK. While now we have on the European Continent a full scale conventional conflict between two nations; The War that has been on hold since the Nuclear Sword of Damocles arrived. Both nations are locked in. One for survival, the other for a complex mix of motivations, some traditional, others recent. Both have invested great amounts of blood and treasure. One has massive resources, the other is in receipt of a steady stream of support. With each passing day, each shock of more death and misery. While in our own nations the domestic world goes on; at times you could be forgiven for briefly not thinking about Ukraine. But it will not go away.

War on the doorstep, be that literal, continental or geo-political in scope. War in one of its uglier industrial scales. No fast sweep of motorised columns; a hard version of commuter traffic, while folk stand gawping, some shaking fists, and then in a few days, it’s all over. ‘How shocking. I hope our government protests,’ you would have thought. Not this time, this was one militaries prepare for; well to begin with not so much The Russians. This was the grand demonstration to a horrified public what happens when the invaded supplied with latest weapons, trained for this happening, take a stand. The attacker very rarely gives out with a collective ‘Whoops’ and pulls back. Instead they revert using whatever they have in their locker, irrespective of the structural damage. While their troops on the ground, weary, low of morale, confused and angry take out their fear on the civilians. And there are the brutal mercenaries, bringing resonances of the WWII German SS police battalions .

Even so, after a while a certain adjustment can take place, what was in your mind, grabbing all of your attention, slips into the background. Back to the Domestic. Home news pushes to the fore, again. Ukraine: you’ve done all you can, you think; price rises, job security, polemical domestic politicians, they cannot be avoided.

However this war will not go away. The scenarios in which NATO is involved begin to take credible shape. Are you prepared for those? Are you ready to support such a step? Or would you judge it is best for all if the war is let to run down and Ukraine accept it has Fought the Good Fight, but must accept some compromise with Russia? Would you then hope the cost in men, material and economic damage would cause the downfall of the present Kremlin Court, then fences can be repaired, slowly and to salve our consciences money is poured into the surviving parts of the Ukraine. Money? Where from? Our own economies are suffering. National Debt is high. Some economists must be having sleepless nights, more so those in the various Financial Branches of governments. There again as we steer around the circle, NATO being involved would bring its own heavy costs. Unavoidable, pick one.

Whatever path is taken there will be prices to be paid. Militarily, Economically, Politically, Ethically even (Remember, every Ukrainian victory or defiant stance comes with a price in Russian blood, we also are now locked into that one way or another. Remember those days when you thought killing of anyone was reprehensible, but you still do. Except the World doesn’t allow you that detachment)

To re-visit. With the coming of Covid the world changed, though we got off lucky; a different strain could have brought an unmanageable death rate. But we are learning to live with it; just have to stop playing politics and silly conspiracy role-play games . A war in Europe involving Russia vs The West. Now that is no so easy to walk through; if it stopped tomorrow, all arms laid down the resonances would continue for at least the rest of the decade. How long before Russia and Russian stops being associated with brutality?

So far I have used the ‘?’ symbol six times. Could have been more. Strategies still developing in The West and Blindness to Consequences in the Kremlin. We are on a road in a fog, approaching something more than a crossroads.

I did not bring in other issues, such as the catastrophic drought in the Horn of Africa, or the likely famine in Northern Africa due to the disruption of grain supplies from Ukraine & Russia, or…..

On reflection I was likely wrong to use the road, crossroads analogy.

Perhaps it would be more accurate to say ‘Make your accommodations, or sketch out your own forecast so you may navigate through the storms ahead,’. Perhaps? (Nine ‘?’s and counting).